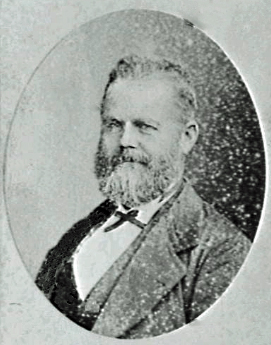 Wollongong shop keeper, John Bright, died in 1883 and bequeathed most of his large fortune to the Wesleyan Church in NSW.  During his lifetime, he was generous to local causes and active in community organisations.

John Bright was born in 1831 at Hawkeswell in Essex, England. He was one of nine children of Charles Bright and his wife, Ann Franks.  John came to NSW about 1852 to work for the importing/exporting and retail company - Price, Favenc and Gwyn. .He joined William Davis running the Victoria Stores in Crown Street.  The shop was next to the Commercial Hotel which was on the south-western corner of Crown and Church Streets.  They sold groceries and household items.  In 1857 the partnership ended when William Davis took up the licence of the Harp Hotel.  (IM 20 Jul 1857 p3)

Early in 1860,he opened the London Stores in a his own buildingon the northern side of Crown St.  In April, he thanked customers for their support and reminded them that his business philosophy was – Small Profits and Quick Returns. (IM 10 Apr 1860 p3). The strategy obviously worked for when John died 23 years later, his estate was valued at over £62,000. (NSWSR-John Bright Probate File Z05347, 20/6994).  By comparison, the weekly wage of the man employed to care for the pit ponies at Coalcliff mine was £2/2/0. (IM 6 Jul 1883 p3)

John Bright married Catherine Ann Osborne in Wollongong on 18 July 1860.  Catherine was the daughter of Robert Osborne and Rebecca Musgrave who emigrated from County Tyrone, Ireland in 1837.  Their son, Charles Osborne Bright, was born in 1867.  He died on 4 October 1880.  The Bright’s had no other children.  Catherine Bright died on 11 April 1882 after suffering a stroke while visiting friends at Dapto.  She was buried next to her son in the Methodist section of the Wollongong General Cemetery.

John Bright remarried on 22 January 1883 to Esther Ann Lee Dobinson.  She was some 30 years his junior.  John and Esther Bright sailed for England on 2 March 1883.  Before departing, John settled his outstanding debts and took David Fyfe Rudkin as a partner in the London Stores.  (IM 9 Jan 1883 p2).  He also wrote a will and appointed Francis Woodward (solicitor) and William Wiseman (coachbuilder) as his executors.

On their way to England, the Brights visited Naples where John contracted typhoid fever. He died in London England on 14 May 1883 and was buried next to his father in the Rayleigh churchyard on 17 May.

He left a complicated estate that took 34 years to settle.  Beneficiaries included the Albert Memorial Hospital (£1,000) and £3,000 to the Wollongong Methodist Circuit to support a second minister.  The bulk of his estate valued at around £60,000 was left in trust to the NSW Wesleyan (Methodist) Church Sustenance and Extension Society.

His trustees were instructed to hold part of his real estate in trust for his widow so that she could enjoy the rents and profits from land and buildings he owned in the block bordered by Crown, Keira, Market and Church Streets at Wollongong.  The property was valued at £10,000.  The properties in Crown St were more problematic for the trustees.  Much of the land was vacant and yielded no income.  The trustees were constantly pressured by elements in the Methodist Church to use capital from the Bright Bequest and to increase income.

From May 1910, the Trustees offered 20 allotments for sale in Market, Keira and Church Streets.  Not all were sold but most along Keira and Market found new owners.  The Trustees and the Methodist Church retained the bulk of the land with its increasingly ramshackle buildings. In 1937, the Church took control of the estate and two years later built an arcade named after John Bright at 184 Crown Street.  The arcade had 16 shops and offices.  The Bright Estate contained a total of 36 shops and offices.

In the early 1970’s, the Abbey Capital Property Group acquired John Bright’s former domain in order to build a new shopping centre.  They also acquired the Royal Hotel on the corner of Crown and Keira Streets which never formed part of the Bright Estate.  Crown Central opened on 5 November 1975.  Management twice closed the doors of the new Venture store fearful for the safety of first day shoppers. (IM 6 Nov 1975 p3).  Crown Central was acquired by the GPT Group in the late 1990s.