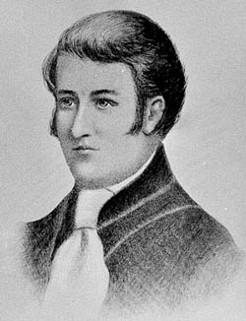 Gregory Blaxland arrived in the Colony of NSW in 1805. He received extensive land grants in areas of his choosing and added to them by purchasing other parcels of land. He also received government assistance in the form of convict labour. Despite these opportunities, Blaxland sought further land to expand his business and agricultural interests. He was 35 years old and had been in the Colony for eight years when he crossed the Blue Mountains in 1813 with William Lawson and William Wentworth looking for more land for the expanding colony.

In recognition of his exploration, Blaxland was promised land in the new western area but following a visit he made to the Five Islands district around 1815 he applied to exchange this additional land grant. The Colonial Secretary approved the swap on 8 August 1816 - His Excellency will authorise your receiving one thousand acres in the New District called the Five Islands in lieu of that quantity which he had promised to assign you in the Country westward of the Blue Mountains. As you consider that such exchange will be to your advantage.

More than a decade passed before Blaxland followed through on this approval. While on a visit to London in 1827 he wrote to the Secretary of State for the Colonies seeking “encouragement to enable him to introduce the culture of tobacco into the colony.” His request was denied but he persisted and on his return to the colony, he wrote to Governor Darling on 16 December 1829:

I have been to examine the land in the district of Illawarra. When I saw it fourteen years back I considered it the most eligible part of the Colony, I had then seen, for the culture of Tobacco, and my last visit to it, has strengthened my former opinion. This circumstance I stated to the Under Secretary for the Colonies when in England and at the same time distinctly informed him (on his asking the question) that I intended, if possible, to take my land in this district.

His letter went on to state that since he first visited the Illawarra much of the land had been occupied by settlers and the rest was marked on the Chart as reserved land. Blaxland concluded his letter with a request that he be allowed to take my land from the first Reserve in the district of Illawarra, that nearest to the Boat harbour on Mr Smith’s grant. In the first months of 1830 there was some confusion about the exact location of the land Blaxland was seeking. He called at the Surveyor General’s office in person to inspect the maps. He was denied his first choice of land near the Boat Harbour as this was reserved for a Township. Blaxland’s next choice was behind the Lake where the Veterans are located.

On 5 March 1830 approval was given to Blaxland to receive 15 square miles or 9,600 acres on stringent conditions. He received 2 square miles (1,280 acres) immediately and was required to clear one third of that property within 7 years with 40 acres required to be under the culture of tobacco. On meeting these conditions, he would receive 2 further square miles on the same conditions. Blaxland was not happy with the conditions imposed stating that these would make his business venture unworkable. He finally accepted the terms on 5 May 1830 when he wrote to the Colonial Secretary confirming his selection of 1,280 acres for immediate possession.

He described the location, which is today the suburb of Figtree, located on both sides of O’Brien’s Road - bounded on the east by Mr Spearing’s grant and some small settlers on the south by the section line forming Jemima Jenkins North Boundary on the West and on the North by Mountain and 1,280 acres I have selected to be kept in reserve is bounded on the North by one of the sections I have selected on the east by Jemima Jenkins West line Mr Wiley’s grant and the other small settlers, extending on to Mr Western’s line on the south side and bounded by the mountains on the west both grants extending 4 miles from North to South.

Blaxland was an absentee landowner and he appointed an assigned convict, Thomas Mahar, as his resident overseer. Huts were erected and at least four other assigned convicts were employed, no doubt engaged in clearing the land. But things did not go well for Blaxland.

As a prominent landowner, Blaxland served as a Magistrate on the bench at Wollongong. There were complaints about his frequent absences. Over the next two years Blaxland made no progress with his tobacco farm and his land grant was revoked on 4 April 1833 when the Colonial Secretary informed the Surveyor General that - Mr Blaxland has been apprised that his project for growing Tobacco under the patronage of the Government is at an end; and request that you will accordingly consider the remainder of the Land reserved for this purpose as open to selection.

By then Blaxland had permanently removed to the Hunter River District and little more was heard of him for the next two decades. He lived to the age of 74 but committed suicide on 1 January 1853. Blaxland was known for his moody and mercurial character. His mental health was affected by the early death of two sons and his wife as well as some close associates. Blaxland’s Illawarra land was acquired by John Hubert Plunkett early in 1837. Plunkett was Solicitor General of the Colony in 1832, and he became Attorney General in 1833. He subsequently subdivided the land and the Keelogues Estate was advertised for sale in 1839. Over the years, the land was subdivided further to form the suburbs of Figtree and West Wollongong