Bellambi LighthousePermanent exhibit in the courtyard

The Bellambi Coal Co. Ltd. erected a lighthouse on the shoreline at Bellambi Point in 1913.  The light sat on a steel tower 15.8 metres above sea level and could be seen up to 12.9 kilometres out at sea.  It was powered by electricity generated at the Bellambi mine and enabled ships to access the company’s jetty at night.  The light also warned sailors of the dangerous Bellambi Reef.  At least seven vessels are known to have founded on the reef.  The last was the Munmorah on 18 May 1949.

The light was made by Chance Bros and Company at their factory near Birmingham, England.  A rotating panel in the interior of the lamp alternatively blocked and exposed the light.  The period that the light was exposed was twice as long as it was blocked.

This distinctive pattern enabled ships to distinguish the Bellambi Light from other lighthouses along the coast.  The light was fitted with a Fresnel lens to magnify and direct the light in a straight line.  The lens was lost after the light was decommissioned.  The light is also missing its lamp and the door that allowed access for maintenance.

The Bellambi Light was important to the viability of the coal mines at Bellambi and South Bulli.  Thomas Hale opened the first mine at Bellambi in 1857 and built a small jetty at the Point in 1858.  The mine ceased operation in 1862 but re-opened with new owners in 1888.  A substantial timber jetty was built and connected to the mine by a railway.

A second jetty was built in 1889 but it was destroyed in a storm in 1898.  The company also owned the South Bulli mine and after 1901 used the jetty to shipped coal from both mines using their own ships.

The Bellambi Jetty was very exposed when the wind came from the south or east.  Ships could not use it in bad weather and had to wait off shore until conditions improved.  This affected the viability of the jetty and the mines.  The development of safer harbour facilities at Port Kembla led the company to discontinue use of the Bellambi Jetty in 1953. 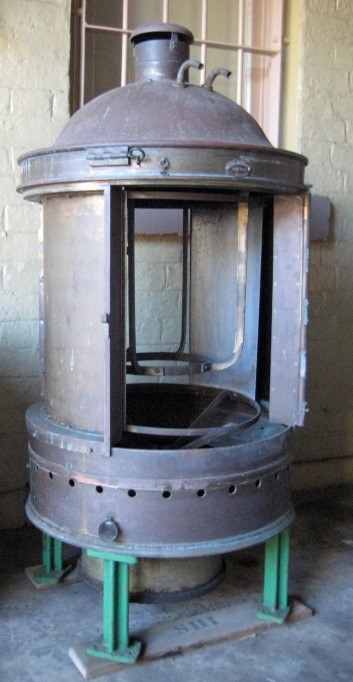 Organise your next visit, book a group or view museum hours.